Home/blog/Samsung Pay vs Google Pay: What`s The Difference?
Previous Next

In this day and age, there are some, like the undersigned, that still carry the old thick wallet around, flicking through credit cards/cash, or collecting dropped coins in front of a busy cashier at the supermarket…the thought only sends us into panic mode, true? I feel you.

Thus, we should stress less and use technology more, by using the Samsung and Google Pay options, for example. There`s also Apple Pay, I hear you, I know, but that`s for another article.

Launched in South Korea and United States in 2015, this mobile payment service by Samsung, as its name goes, provides a digital wallet enabling users owning Samsung devices, or other compatible ones, to effect payments at authorised outlets.

You can simply download it from the Google Play Store, and launch it by swiping from the bottom of the screen. A variety of credit, debit and loyalty cards can be uploaded on the app, together with PayPal, and selected by switching through them on your phone or compatible smartwatch. You can also transfer money to/from others.

On a side note, it is good to know, that as from June 2022 Samsung Pay was renamed Samsung Wallet at least in the US, UK, France, Germany, Spain and Italy. Along with the naming came extra features, as the app now can hold digital assets and keys too.

This is always key, especially if we are going to use an app holding all our hard-earned bling.

In the case of Samsung Pay, it is secured by Samsung Knox and ARM TrustZone technologies, while credit card information is stored in a safe token. Moreover, payments must be authenticated using a fingerprint scan or passcode.

Launched in 2011 as Google Wallet, the service changed its name through the years a couple of times, from Android Pay to Google Pay, and as from this year we`re back to Google Wallet once again. But what`s in a name I hear you saying, as long as it works as it should.

It can obviously be downloaded from the Google-owned Play Store (duh) but also from Apple`s App Store, and has an advantage over its competitor Samsung Pay, since this service isn`t restricted to Samsung devices only but works on Android and Apple devices.

Google Pay requires a valid Gmail account and relies on NFC to function, and supports payment and loyalty cards, together with identification cards, digital keys, transit passes, event tickets and health passes, yes PayPal too. Also, money can be sent or requested among Google Pay users.

Multiple layers of security are used by Google using one of the world`s most advanced security infrastructures to help your account stay safe, and protecting your payments.

Google Pay doesn`t share your actual card number when you pay in stores, so your information stays secure.

Both alternatives then allow you to transfer money to others, but we must say that Google Pay makes it easier for users to send/receive currency on their app.

It is good to mention that on both Google Pay and Samsung Pay there are no fees to send money to someone, just select the recipient, the amount, and the payment method to be used.

If they don’t accept the money, it’ll be returned to your account in 14 days.

These two platforms are easy to navigate and also allow users to store their loyalty, membership, rewards and gift cards all in one place for retailers, hotels or travel programs, depending on your country.

However, sending and requesting money on Samsung Pay is only available if the recipient also has a Samsung Phone, Samsung Pay activated on their device, and Samsung Pay Cash set up.

For a quick review we are listing hereunder the core differences for you to absorb at a glance. 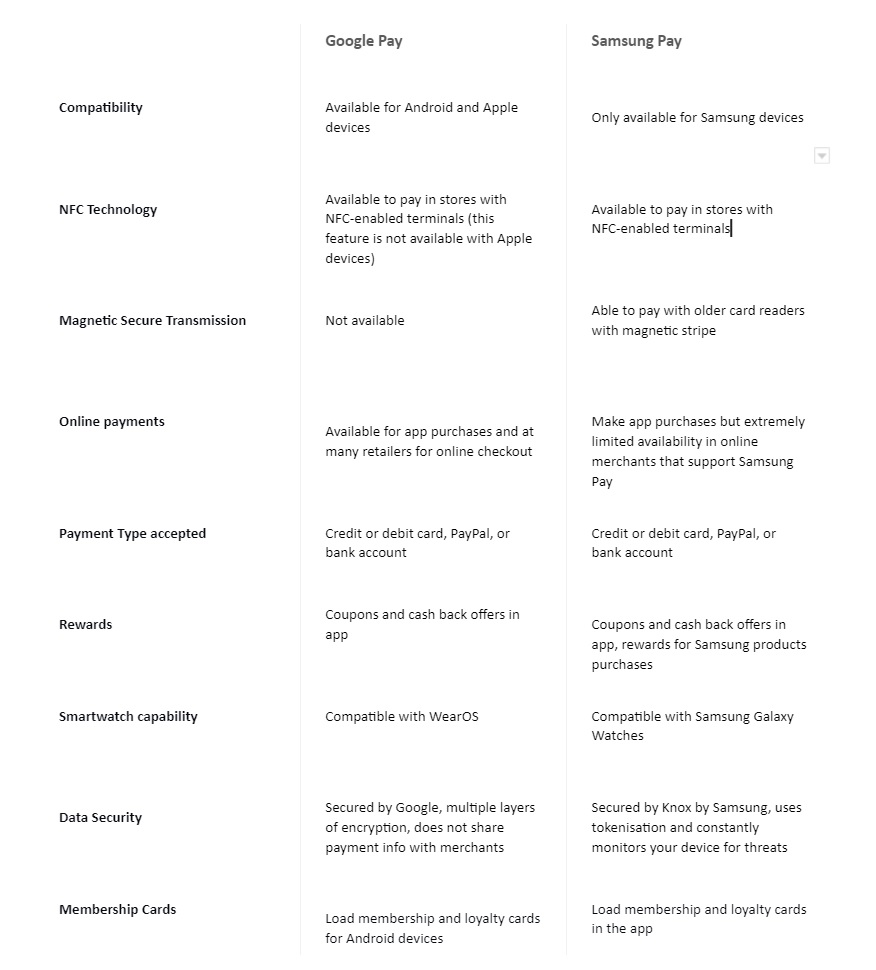 Nowadays, it is becoming more common for online retailers to accept Google Pay, they also show it by featuring the `G Pay` or `Buy with G Pay` buttons on their website at checkout.

Samsung Pay is more restricted when it comes to online transactions, being limited to those merchants who accept Samsung Pay, which are far less than those holding Google Pay.

Both alternatives are brilliant, but in our opinion, Google Pay has an edge since it`s more widely accepted, easier to use online and has more variety of rewards and offers available on the app.

So, what do you say, ready to ditch that wallet?