What is the Clubhouse App?

Home/blog/What is the Clubhouse App?
Previous Next

What is the Clubhouse App?

Along with TikTok, Clubhouse has been one of the most talked-about social media apps of 2021. Clubhouse is currently valued at $1 billion and has more than 10 million active users.

What is it exactly? In this article, we’re giving you the rundown on this (fairly) new app so that you can see what all the fuss is about.

Clubhouse started out as an app for Silicon Valley insiders but quickly evolved into one of the most exciting social media networks of 2020.

First things first – Clubhouse stands out from the crowd by being an audio-based social media app. Unlike Facebook, Instagram and TikTok, which depend on photos and videos, Clubhouse enables users to communicate in a verbal manner.

After installing and opening the app, users can create or join virtual rooms. These rooms are dedicated to different topics. Different experts occupy different rooms, where they talk about their topic of choice. Audience members can drop in and drop out whenever they like. Users can switch between rooms, listen in for a few minutes, request to speak or create their own rooms. Since the app is audio-based and not video-based, users cannot turn on their phone camera. 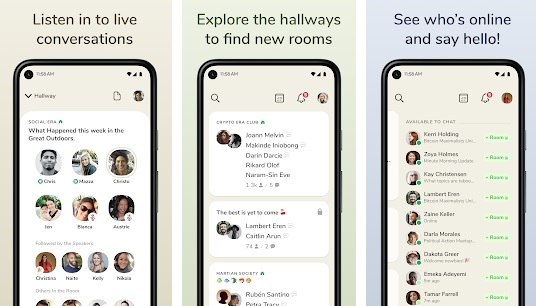 The app quickly became popular during the start of the Covid-19 pandemic. The user number grew rapidly, exceeding 10 million at one point.

Clubhouse is an invite-only app. This feature has contributed to its position as a status symbol – so much so that there’s a waiting list for people who want to join the app. Several celebrities, including Elon Musk, Mark Zuckerberg, Oprah and Drake, supported the app by hosting their own rooms. This celebrity backing continued to boost the apps’ prestige during its first few weeks.

Clubhouse’s exclusivity was also reinforced by the fact that it was an iPhone only app for over a year after its launch. In May 2021, the Clubhouse team announced that they’ll be rolling out an Android version of the app. The Android version is currently only available in the U.S., but there are plans in place for it to become available in other countries.

It’s hard to tell whether Clubhouse will survive beyond the Covid-19 pandemic. Investors are hoping that new features and initiatives – such as Clubhouse-exclusive celebrity talk shows and creator communities – will help the app survive, thrive and compete with seminal social media apps.

There’s also another challenge that Clubhouse is currently facing: the audio-based app market is quickly becoming tough competition. Huge social media companies such as Twitter, Facebook, Reddit, LinkedIn and Spotify saw Clubhouse’s success in the audio sphere, and are now introducing their own version of Clubhouse to their audiences.

One thing is for sure, though – Clubhouse has pushed the boundaries for fledgling social media start-ups and has put the social back in “social media”.